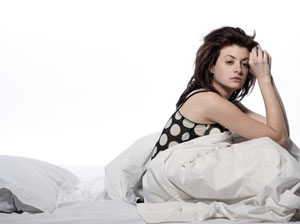 According to common sense and our experiences most of the known complaints will ease, if we have a rest or – even better – go to bed.

This easement is also expected to occur in case of shoulder pain. But as the exact opposite happens, innumerable concerned persons get desperate.

Having lain down, you will shortly after wake up due to most severe pain in the shoulder. It is impossible to fall asleep again, unless you use appropriate remedies which, however, won’t continue taking effect after a certain time.

Should you still miss a reasonable and plausible explanation of this relentless night pain, we will now provide you with it. We will moreover give you some advice how to overcome the night without any medicaments.

In fact the explanation is quite simple. The night pain is caused by the missing weight of the arm!  It really sounds strange: The arm –weighing a few kilos – often hangs down from the body during the day; thus the deltoid muscle between the head of the humerus and the acromion is slightly stretched. The arm respectively the head of the humerus is pulled away from the acromion. Consequently the gap in the acromion will be widened a bit. The acromion is exposed to less pressure during the day and the pain threshold will be lower at least at that time.

If we, however, lie down, this “pull compensation“ is suddenly entirely missing as the arm respectively the head of the humerus is no longer pulled away from the acromion. The strong (deltoid) muscle on the upper side of our shoulder can contract to its basic position. At the same time the head of the humerus is continuously pulled towards the acromion. Finally it hits the acromion and puts so much pressure on the soft tissue that it starts paining. So far it has been almost impossible to help improving this situation. Having reflected on it, we compiled some well-working “FIRST-AID ADVICE“.  They have proved to be helpful to numerous concerned persons. Maybe you will also benefit from them!

Why do we mostly continue suffering from the shoulder pain during the first half of the day as it diminishes only with delay?

If you get up, you can again benefit from the weight of your arm as it again starts pulling the arm and consequently the head of the humerus away from the acromion. It will take a few hours until the (deltoid) muscle, which presses the head of the humerus against the acromion, relaxes. During the day the pressure on the paining soft tissue is eventually relieved to such an extent that the pain will diminish. Our “FIRST-AID ADVICE“ can help you accelerating this process!