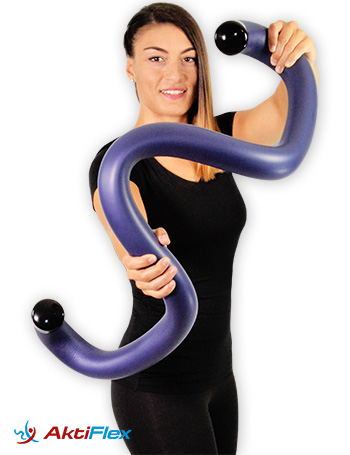 AktiFlex® ShoulderTrainer for correcting the muscles of the rotator cuff. Due to the work-out concept incl. video DVD - attached to each delivery – the ShoulderTrainer can also be easily used at home by non-professionals.

The AktiFlex® ShoulderTrainer is not a result of assembly line production in the Far East, but – on the contrary – entirely manual work. Each of its components is manufactured and assembled bit by bit exclusively by employees of our company and in accordance with strict quality requirements. Prior to being packed, each training device has undergone eight production steps. Each ShoulderTrainer that leaves our company is a unique specimen. All materials used are of top quality and have been tested for absolute harmlessness by an independent institute for material testing. The manufacturing does not only demand skill, but also particular machines and tools and finally results in a German quality product.

The AktiFlex® ShoulderTrainer is an exercise arch which has been exactly adapted to the natural shape of the arm-shoulder area.

The ShoulderTrainer serves as safe and protective support of the arms and simultaneously stabilizes them in a joint-optimal position. This training device is coated with a comfortably soft and medically approved special sponge rubber in a thickness of approx. 12 mm. Most users already realize an alleviation of their shoulder pain right upon positioning the ShoulderTrainer at the body and supporting the arms as the shoulder joints are immediately relieved. In this basic position the so-called “deltoid muscle” is particularly relieved in such a considerable way that the head of the humerus hardly presses against the acromion any longer. When you lift your arms, the humerus head usually incarcerates the bursas and tendons at high pressure and thus causes great pain. You can immediately check out the beneficial effects of such relief by – for example - resting your arm on a padded support in the height of your axilla. As an alternative your partner may slightly and carefully hold up your arm so that you can „drop“ it onto this support. In many cases the shoulder pain will substantially abate!

The AktiFlex® ShoulderTrainer simultaneously serves as „shoulder-muscle-isolator“, which is one of the most essential factors for the therapeutic successes with this device. If the arms firmly rest in the ShoulderTrainer, it is impossible for you to do any other, but the intended exercise movement – the external rotation. Your external rotators will thus be strengthened, while any other horizontal or vertical movements of the arms are prevented. In other words: the muscle responsible for the horizontal movement of the humerus – the pectoral muscle – can no longer actively assist the work-out movement. As the vertical movement of the humerus is completely prevented at the same time, the deltoid muscle cannot participate in the work-out movement either. Ideal pre-conditions have thus been created for remedying the muscular imbalance.

What do you have to do with the AktiFlex® ShoulderTrainer?

It is understandable that the following statement will sound rather dubious to numerous concerned persons who have already undergone various treatments and therapies with frustrating results. But it is a true fact: you only have to do one single exercise, which is possible even at home! You do not require any additional exercises as the shoulder problem is caused by only one single muscle area which could so far not successfully stimulated. The extraordinarily successful treatment of the shoulder is enabled by the ShoulderTrainer on the one hand and by the associated work-out program on the other hand.

Due to the concentrated training and its high efficiency, the work-out units only take 15 minutes. If you do the work-outs 2 – 3 times a week, your shoulder problems may significantly ease already within the first 2-3 weeks of training. After the short period of 2-3 months it will be sufficient to do a preservation training which consists of 2-3 work-outs per month. In that way your improved health condition – free of pain – can be maintained. As the shoulder is and will always remain “in need of care”, you should, however, never stop doing the work-outs.

Functioning and advantages compared with the conventional therapy

During the work-out against the resistance of the expander the target muscles have to efficiently overcome this resistance. This kind of training is very similar to the principle of the isokinetic muscle training. Apart from the quick strengthening of the muscles, the damaged shoulder joint also benefits from being exhausted within short time. Due to this early exhaustion the number of exercise movements is reduced and overstraining is consequently prevented.

As two differently strong expanders are attached to the ShoulderTrainer a continuously increased  the muscle strain is ensured until the „saturation point“ has been reached, i.e. the point when no further increase is possible.

Time factor
The work-outs can be executed at home, whenever you can spare some minutes and as often as you want. You can additionally take the ShoulderTrainer to your work and use the break for some work-outs.

Cost factor
The health insurance companies bear the costs respectively subsidize only a limited number of therapy hours. Even if your therapist used the ShoulderTrainer, the very few therapy hours would at the best lead to an improved mobility or the first minor signs of analgesia.

In order to arrive at an efficient and long-lasting improvement of your shoulder problem by considerably widening the acromial space as required, it is necessary to do intensive stamina training 2-3 times a week during a period of three to six months. After this period the previously damaged shoulder requires further regular work-outs. A preservation training carried out every two weeks as a minimum will then be sufficient. You can meet these preconditions by the one-time acquirement of a ShoulderTrainer.

If the stamina training was done in a therapist’s practice, the amount of accumulating extra payments would correspond to the purchase price of 10 or even more AktiFlex® ShoulderTrainers.

In case of shoulder problem it is, however, strictly forbidden to be lazy as this will usually be punished with the operation becoming necessary.

• Shouldertrainer®- training bow (wide end device versions available). In our complete sets we have the most used shoulder active variant "Standard" "M" pre-selected for you. Use our variant- and size chart to find your right shouldertrainer®.
• Shoulder-Rotator-Scale
• Training expander in various versions
• User manual
• Training video on DVD 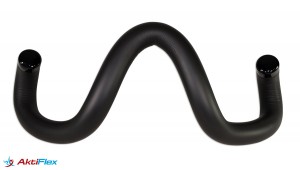 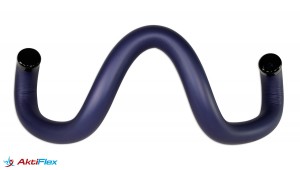 Are the training devices available in various sizes?

Yes, we offer our devices in various sizes and types. Please use our type- and size list to find the shoulder aid which is appropriate for you. The type “Standard” in size “M“ is pre-selected in our online shop as it fits most frequently according to our experience. Please use our list as well with Amazon. 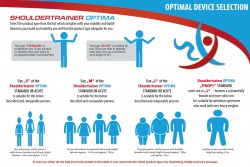 Should one of these criteria not be applicable to you, please use our sizing chart to select your right shouldertrainer. Variants with lower armrest (acute) can be found there, as long as it does not allow control of your body at the time that you can raise your arms sideways to about shoulder height.

Which diseases may abate?

Improvement in case of luxations in the posterior joint area:
Shoulder luxations may happen if the muscles of a joint are not uniformly stabilized and additionally overstrained. Somebody tending to luxations due to weak muscles – mainly in the back part of the shoulder – can take effective preventive actions against further future luxations by doing intensive strengthening training with the ShoulderTrainer.

Pain in shoulder /arm including paraesthesia in arms and hands:
In this context it is important to know that - apart from muscles and tendons – various nerves leading to the arm and hand pass the acromion in various channels. In consequence of a narrowed acromion certain nerves may be incarcerated, which may in turn lead to extreme stabbing pains in the arm or paraesthesia (tingling) in the arm or hand.

May pain in the neck and bad posture improve?

Can the posture be improved by training? 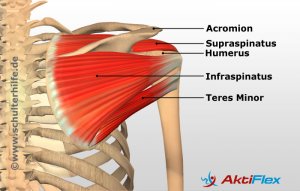 The sometimes highly considerable improvement of the posture is a very welcomed „side effect“ of work-outs with the ShoulderTrainer. As the strengthened target muscles are also responsible for holding our shoulders back, a permanently and clearly visible improved body posture has already been achieved after an 8-week intensive training. Such attractive posture can otherwise only be achieved with a lot of discipline following the instruction “Chest out, shoulders back”. Numerous customers buy the ShoulderTrainer only because of the substantially improved posture although they do not suffer from any shoulder pain. These clients are optimally protected from any future shoulder problems!

Can neck problems be eased?

What about the chances of improvement?

Please be ensured that the chances of improvement are proportional to the stage of your disease. The earlier you take action, the greater is your chance of entire physical recovery! Every day counts! A damaged shoulder area can cause numerous problems which may also considerably ease thanks to work-outs with the ShoulderTrainer.

Can the ShoulderTrainer replace medicaments?

Numerous clients happily inform us in a phone call that after already the first week of exercises with the ShoulderTrainer their pain, mainly the severe night pains have substantially eased as the acromial space has already started widening. Consequently the concerned persons cannot only reduce the dosage of their painkillers, they can also sleep through the night. As a lot of prescribed medicaments have severe side effects – mainly in the gastrointestinal area – any reduction of them is a very important factor. Instead of anti-inflammatory drugs, cooling the paining areas with ice-packs is very often quite helpful.

Are there any contra-indications?

• If you suffer from diseases or damages of the target muscles (Infraspinatus and Teres Minor), work-outs with the ShoulderTrainer might be dangerous for your muscles, although in individual cases a successful training was executed despite a torn Infraspinatus muscle. In these exceptional cases the healthy Teres Minor muscle fulfilled the function of external rotation and consequently strengthened substantially so that .the concerned person was happy to realize a substantial easement of the shoulder problems.

• Operations  at the lymphatic system in the area of the axilla, hypersensitivity of the ulnar nerves or cardiac pacemakers implanted in the chest.

• And please bear in mind: None of our explanations and instructions can in no way replace a visit to a doctor. 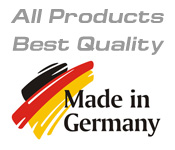